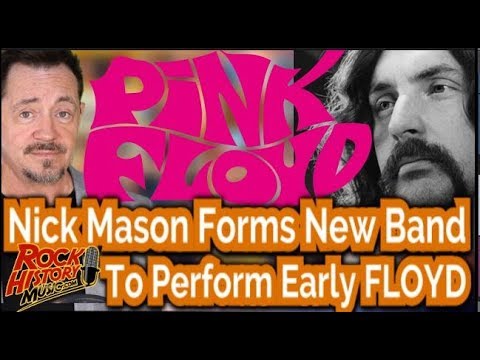 Nick Mason To Play Early Pink Floyd in New Band The group is called Nick Mason's “Saucerful of Secrets” after their second album. It was the transition album that would feature both Syd Barrett and his replacement David Gilmour from 1968. The new band which consists of Gary Kemp of Spandau Ballet, Lee Harris of the Blockheads, bassist Guy Pratt, composer Dom Beken The shows start in London in May. Mason's group said in a statement, “This is a unique opportunity to experience Pink Floyd’s celebrated and significant early body of work played live including songs from albums The Piper at the Gates of Dawn and A Saucerful of Secrets, Very few bands are as culturally important as Pink Floyd. They are one of the best selling music artists of all time and Nick Mason is a founder and the only constant member of the band performing on all of their albums as well as all of their live shows. This will be Nick Mason’s first live musical outing since Pink Floyd played at the 2005 Live 8 concert in London.” tickets https://tickets.halfmoon.co.uk/nick-masons-saucerful-of-secrets John Beaudin has been in major market radio (Edmonton, Vancouver & Calgary) for 35 years and a music journalist since 1989. He graduated from Broadcasting school as a news man so he would have the skills to write about the artists that inspired him since he bought his first album, “Madman Across The Water” by Elton John as a teen. In the 80's Beaudin was the host of the syndicated radio show “The Cross Canada Report” which had two version (Rock and A/C). Beaudin was also asked to be a judge at the Juno Awards (Canada's answer to the Grammys) Twice. He has anchored every position in radio including morning and afternoon drive and was a Program and Music Director for The Breeze and California 103 in Calgary. He currently hosts the popular Lovesongs at QM-FM in Vancouver and on iHeartRadio. To Follow John Beaudin's posts on all subjects https://www.facebook.com/JohnBeaudinBroadcaster/?ref=br_rs To Follow John's “Rock News” only posts FACEBOOK  https://www.facebook.com/rockhistorybook John Beaudin Official Website  http://www.johnbeaudin.com TWITTER for Rock History Music  https://twitter.com/rockhistorybook TWITTER for John https://twitter.com/johnbeaudin Subscribe to this Channel https://www.youtube.com/channel/UChUv5CZuAuh08DfHA8klNSA?view_as=subscriber SUBSCRIBE TO OUR SISTER ROCK CHANNEL https://www.youtube.com/channel/UCDKUUfqq_iuwk63pZEUOTIQ Heading West by Audionautix is licensed under a Creative Commons Attribution license (https://creativecommons.org/licenses/by/4.0/) Artist: http://audionautix.com/